This exhibition attempts to portray the lonely and isolated facets of Korean society experienced following an economic crisis known as the IMF. Surviving poverty, the people of South Korea suffered severance from close human relationships such as family, forced upon them by external forces. In other words, this exhibition reflects a society of people with hunger, not for food or resources, but for love and passion. A standard exhibition would involve renting a gallery, inviting only a few select art people, perhaps doing a small opening event, and closing after about a week. This was not my intention for this body of work. I intended to share my message with as many people as possible, so I put the exhibition inside of a shipping container and moved it around within Seoul to places with the most floating population. The exhibition succeeded, with over 4,500 visitors. This exhibition was sponsored by the Seoul Foundation for Arts and Culture. It was planned to be exhibited in front of the City Hall Square, Hongik University subway station, the national assembly at Yeouido, and a large supermarket in Yeongdeungpo. 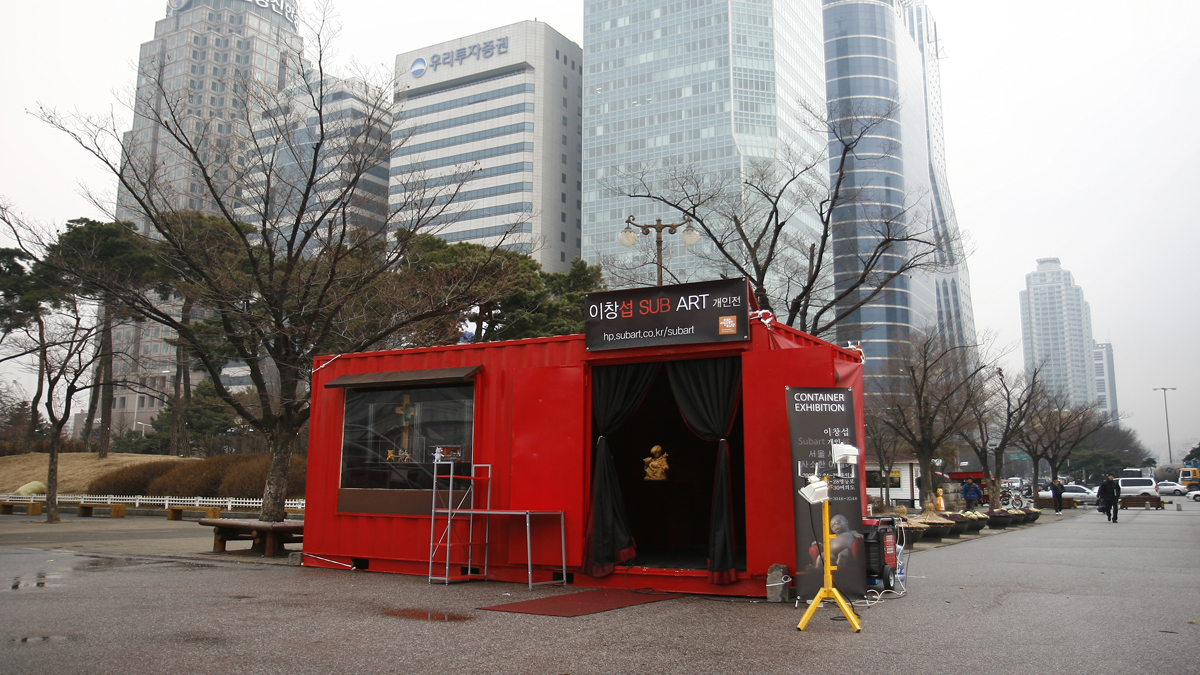 visitors to the exhibition 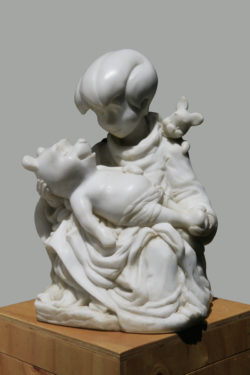 2007 / h 600 x 300 x 300 mm / marble
Portraying a longing for the happiest memories in life, as a child in the embrace of one’s family, this sculpture presents a pieta, depicting the sorrow of the loss one’s child.

2008 / h 300 x 400 x 150 mm / mixed media
This work portrays the countless divorced families that appeared all over Korea as an aftermath of the economic crisis. The character presented as ‘Pooh’ is observing this situation with a first-person perspective. A family dinner we used to take for granted, for some people, has become an impossible thing, a dream supper. 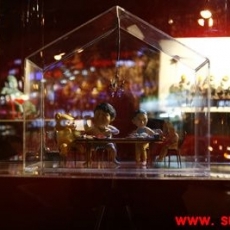 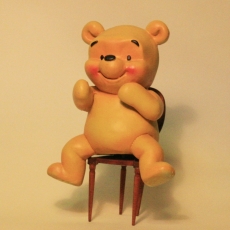 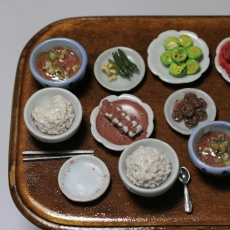 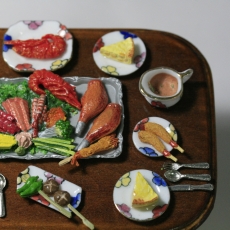 2008 / h 300 x 550 x 300 mm / mixed media
This cart bar run by Pooh is like any other cart bars in Korea, a place where you can catch up with friends you no longer see in your daily life. However, in this particular cart bar, a friend in white collar seems too tired to listen to his blue-collar friend who’s got so much to say despite his friend’s indifference. They try to find solace in alcohol, but still, they seem fatigued by society. 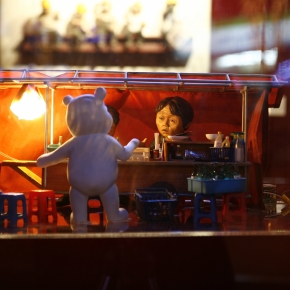 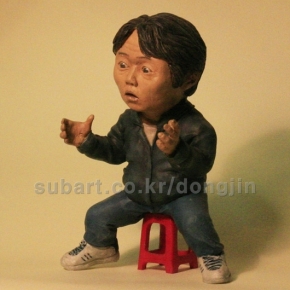 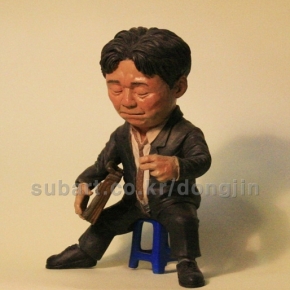 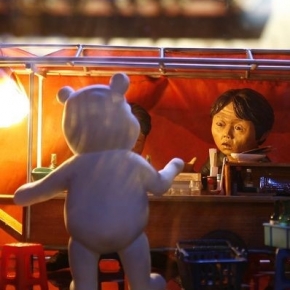 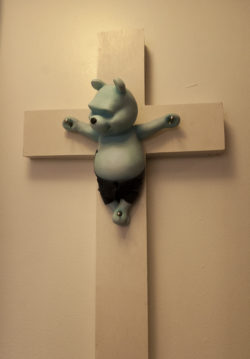 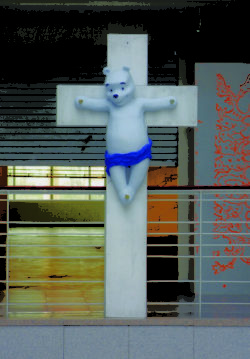 4-1. The Crucifixion of Pooh

2008 / h 400 x 600 x 180 mm / rigid urethane, wood, three nails
The Crucifixion of Pooh was made with this thought in mind – what’s left for the many who overcome adversity with the sacrifice of a single self or somebody else.

4-2. The Crucifixion of Pooh 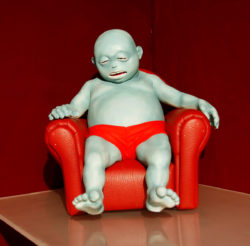 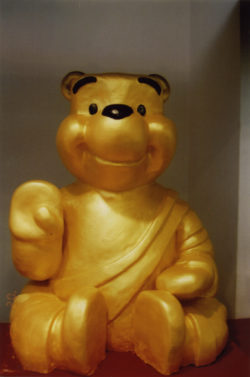 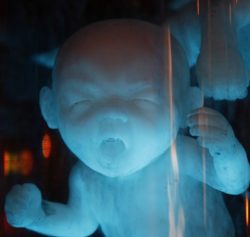 2003 / h 800 x 600 x 450 mm / transparent resin, luminous pigment
beings that appease the grief of fathers who had to erase their children due to economic and other circumstantial difficulties.

8. A Middle-aged Man in a Sauna

2006 / h 3000 x 3200 x 2000 mm / fiber reinforced plastic, oil paint
A smaller figure of a man with these sons in a sauna was exhibited facing the larger solitary middle-aged man figure. This work provided a space where the visitor could take pictures, sitting next to this large man, while the figure overlooked the vision of his dream. 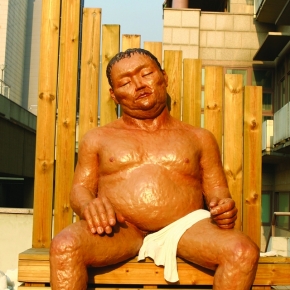 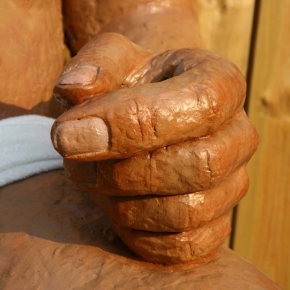 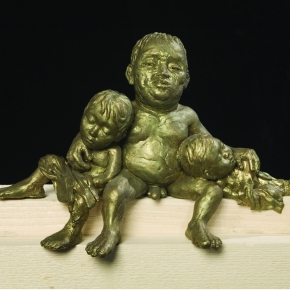 2006 / h 3000 x 3200 x 2000 mm / rigid urethane, lacquer
I told a story of men commonly found in construction sites in a 4-panel cartoon style. They are always talking about societal issues but uninterested in the stories of others, daily life is more important to them. Asides from the single figure who discusses the societal issues, all of the other figures are eating American food and drinking beer. In their hearts, they have an instinctive passion for their society, but they are incapable of expressing this. The figures are named Danton, Pierre, Benoit, Antoine, Frederic. Their names are like those of the French revolutionaries that lead the French Revolution. 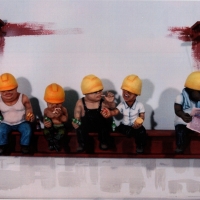 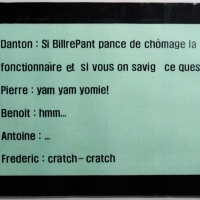 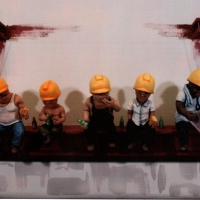 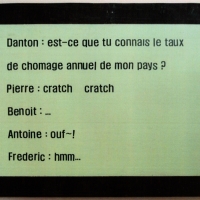 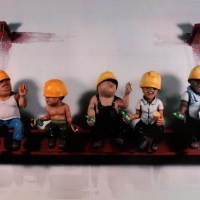 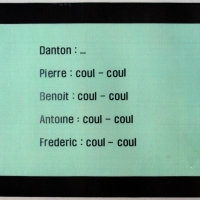 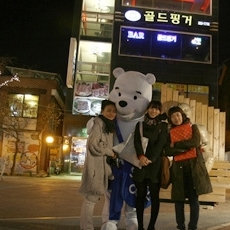 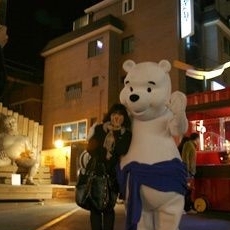 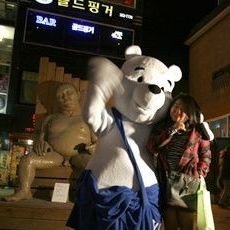 I faced a lot of administrative difficulties trying to put together this exhibition; spaces were booked and cancelled a week before the show, the truck transporting the shipping container could not move during weekdays, and certain places did not allow trucks to enter in the first place – al of this in 15 degrees subzero weather. Despite this, I successfully moved the exhibition around to different spots with the largest floating population. Over 4,500 visitors came to the exhibition, and I received a lot of helping hands. I could not spend the holiday season with my family from having to guard the exhibition, but seeing the families enjoy my works and couples warming themselves in the exhibition space gave me solace. I was met with warmth from a lot of people, but I remember one particular encounter with a grandmother who came to the exhibition in Yeongdeungpo. She held my hands tightly and asked me to ‘keep making exhibitions for the working class,’ and it made me want to continue making work that brings itself to the public.